On set with Look What She Did! Last weekend we accomplished our biggest-yet Look What She Did! shoot, involving 8 crazy-great women telling us about 8 crazy-great women. Hey, wait a minute, one of our interviewees was a guy, the first one ever on our project. Rick Zieff offered to do his interview in drag, but we decided that was unnecessary as we are flexible and open-minded gals. Rick was invited based on his sheer enthusiasm about his subject, Ernestine Fields, the Teddy Bear Attorney, a woman who has created a national program called Comfort in the Courthouse to help children in Family Court. Ernestine visited our backyard set on Saturday and we were thrilled to meet her in person and hear more about her projects.

Our harmonious all-female crew had a tremendous time working together (stringing up tablecloths in the lemon trees to diffuse the sunlight…) and listening to stories of women who fought to change their worlds and created important, lasting effects for all of us. On Saturday we heard about a brilliant scientist/artist from the 17th century, an Academy-Award winning costume designer who inspires unconventional beauty, the first Black female novelist who wrote her major work while hiding in the Underground Railroad, and one of the seminal founders of Jazz in America– unheralded women who we want to know about! Sunday we started with a beautifully told story by our lead editor, Farrel Levy, on an artist-nun who saw spiritual meaning in the most unlikely places.

We also heard about the first art photographer, a woman who elevated photography from its designation as archival by daring to infuse her work with feeling; we finished the weekend hearing about the woman who founded the Feminist Health Initiative, a housewife who shocked everyone with her radical commitment to women’s control of their own bodies. I am so grateful to my friends who took the time to tell us these inspiring stories, many of whom are not that comfortable in front of a camera. It is the core mission of this project that we should hear stories about real women from real women, and I so appreciate your commitment in showing up for this lovingly hand-made series.

And to our mind-blowingly great and dedicated volunteer professional crew– thank you. It would not be possible without the generous gifts of your time and talent.

I had a ball, can you tell? The Look What She Did! crew. 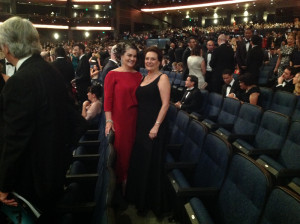 So proud to say my friend Lenora Champagne’s collection of plays has just been published!

New World Plays contains her first three works and they are beautiful. I wrote the introduction entitled “The Audacity of Her Vision” because Lenora has an audacious vision as an artist and it’s evident in these striking plays. Like me, Lenora is originally from rural south Louisiana… and despite a lifetime in the big city, we can’t shake our muddy Cajun roots. Potent imagery from home is laced through these sophisticated works of avant-garde theater in a way that is both startling and familiar. Lenora is a true sister, as an artist and a homegirl, and I hope you’ll check out her book. The book, published by NoPassport Press in their “Dreaming the Americas” series, includes three early plays:  Isabella Dreams the New World, My Nebraska, and Coaticook, along with a foreword by playwright, screenwriter and director Julie Hebert, an introduction by poet, playwright and director Fiona Templeton, and a thoughtful interview by American Theatre editor-in-chief, Jim O’Quinn.
You can order it directly online from No Passport Press at www.nopassport.org/inprint,

or from amazon.com, barnesandnoble.com, or lulu.com.

See more of Lenora’s experimental work on her website: lenorachampagne.com Look What She Did! New Interviews

Happy to say we’ve posted six new interviews on the Look What She Did! YouTube channel. Check them out here:

Ellen Gavin, Roberta Levitow, Julie Sgarzi, Alice Tuan, Melinda White and Ruth Cusick tell us about some amazing women– women you need to know about, including a founder of the ACLU, an El Savadoran immigrant, a CEO of a Fortune 500 company, and Mother Uganda. The women being interviewed are as interesting as the women they’re talking about. We’ve fallen in love with them all. See for yourself. A few photos from our two-day Look What She Did! shoot last weekend in my backyard.

We had Dr. Julie Sgarzi speaking about Jungian analyst Gilda Frantz who at 87 has just published her first book; Activist attorney Ruth Cusick told us about Magdalena Aguirre a woman who escaped the civil war in El Salvador then sent money back to her family over the years to fund a family compound of four houses; Director Roberta Levitow conjured up Rose Mbowa, known as Mother Uganda, a woman who said no to Idi Amin; Playwright Alice Tuan reminded us of Rachel Crothers a woman who wrote and directed plays on Broadway before women had the right to vote; Business leader Melinda White extolled the virtues of her mentor CEO Maggie Wilderotter, one of the most influential business women in America; Writer Ellen Gavin touched us with her portrayal of Elizabeth Gurley Flynn a bold and brilliant activist, a self-made woman who changed the world. We had a blast listening to the stories of these amazing women and recording them for you. The edited interviews will be posted in the New Year.

Meanwhile, hearty thanks to our generous and talented crew this time around: DP Ellie Ann Fenton, Producer and Sound Engineer Courtney Graham, Producer and Bon Vivant Jill Klein, and thank-god-they-know-how-to-do-this-stuff Editors Farrel Levy and Franzis Muller. This project couldn’t happen without a lot of women giving a lot of time and I am so grateful to you all. More fun to come! For more pictures and information check out the Look What She Did! Facebook page

Also, take a look at the Look What She Did! YouTube Channel!

LOOK WHAT SHE DID! JILL KLEIN on CLARA SHORTRIDGE FOLTZ

So proud to present our very first Look What She Did! interview with the audacious Jill Klein.

This is a project dear to my heart where we interview great women talking about other great women who have inspired them. We’ll be posting new interviews over the next few weeks, so keep checking in here and on my Facebook page.

We just finished another shoot this past weekend of six new amazing interviews which we’ll be sharing with you in the New Year.

Help us kick off Look What She Did! by forwarding the links to the interviews, liking the FB page and subscribing to our YouTube channel.

We are in the early stages of this project which I hope will go on for many years– as there are many astonishing women in the world– and we would very much appreciate your support. Thanks!